✨ You’re here to do more than just exist. Discover how to transform your life with crystals here. → 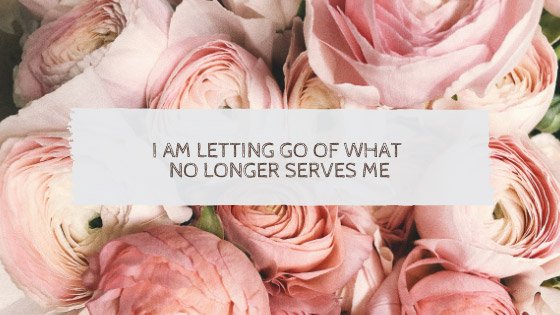 She feels like her parents are the source of her unhappiness. They don’t like her partners. They never seem satisfied with her achievements. They say they just want the best for her. But really, she just wants to feel like the best to them. And it’s not just to them, this idea of not feeling good enough affects every area of her life. And because of that, she also doesn’t feel like she’s deserving of a life she wants. Letting go of these thoughts and feelings is not an easy or quick process, but it begins with compassion.

She began adopting these beliefs when she was younger, always striving for her parents’ approval and never feeling like she could meet their expectation. Slowly, this feeling of being inadequate has become a learned behaviour. Now, a normal way of living her life. It doesn’t actually matter what she does or what her parents say, she always carries these preconceived ideas about herself – not being enough and feeling unworthy.

Every encounter with her parents makes her angry and causes her immense anxiety. It has gotten to the point where she avoids even answering their calls. Just seeing their name pop up on her phone puts her in an anxious state, and as soon as they say anything to her she fires off at them. Her physical self has learnt to react to her parents in a certain way – tensing up, tight chest, feeling nauseous. Her emotional self has learnt to become angry at them and then once she has calmed down she feels angry at herself for reacting that way. Then she feels sad because she can’t please her parents and then she feels guilt and shame for not being the daughter she wishes she could be. She feels guilt and shame for not being the type of person she wants to be, for not living the life she wants…

As children, we take on belief systems that we have adopted while growing up. But as adults, it’s now our responsibility to choose which beliefs are serving us and which ones aren’t. Which beliefs we need to let go of – the ones that hold us back from a happy, meaningful and fulfilling life. She has a choice to remain in this cycle of not feeling good enough and feeling unworthy. She also has a choice to take ownership of how her parents make her feel.

We always have a choice in how we allow people to affect us. This is what it means to be empowered – to take our power back from someone else. We don’t have a choice in what the other person will say or do. That is their responsibility. But we can take control over the way we receive their actions. How we interpret something is always our own story, our personal power. So when we decide to interpret someone’s behaviour as negative, it’s only our self who suffers from that choice. We may try to blame them for making us feel the way we feel. But that again is giving our power over to another person. As long as we feel like the victim in a situation, we are disempowering our self. And the irony is that it is our own self who ends up suffering, not the other person.

In fact, the other person may never even know how much their behaviour hurt us. And letting them know is often irrelevant in the process of making us feel better. It’s not a necessary part of the healing process. Expressing our pain can make us feel better, but it doesn’t have to be to the person who we feel let us down in the first place. Healthy expression begins with self-compassion and self-love.

Think about when a loved one is feeling sad or angry. How do you try and make them feel better – what do you do for them or say to them? Now, show that same loving behaviour towards yourself. Rather than trying to get over it or suppress emotion, allow yourself the time you need to feel all the things. Journalling can be a wonderful way to get a better understanding about what it is that you need, to bring it to the surface so that you can have a greater perspective of what is going on in your mind and your heart.

Compassion is also the key to improving your relationships with others too.

In our healing session together, my client’s Third Eye Chakra was blocked in this situation with her parents. She can’t see the reality of the situation. She is blinded by her past beliefs and experiences to ever have a healthy relationship with them. The reality which she cannot see is that it is not her parents who hold her back, but it is her own stories that keep her from living a life of her dreams. Those stories may have been theirs once, but she has now adopted them as her own beliefs about her self. She hasn’t felt good enough to them for a long time, but that isn’t what holds her back. It’s the fact that she doesn’t think she is good enough for anybody.

We have some work to do together to get her to a place where she feels worthy of living a life she wants. But as we work on her relationship with herself, we’ll also be working on her relationship with her parents. She is quick to tell me, “I’m not ready to let go, they have hurt me so much.” And I don’t ask her to do anything she isn’t ready to do yet. She has many many years of unlearning behaviours and beliefs she has formed. I do ask her to do one thing though. Next time she thinks about them, rather than allowing herself to get into a state of anger, shift into a state of compassion. “Place your hand on your heart and breathe,” I explain this as a simple way to feel compassion. For a moment, allow yourself to receive love.

It’s difficult to be angry at someone when you are feeling the love. By shifting her thoughts to be fuelled by compassion rather than anger, she is taking her power back. She is taking responsibility for how she wants to feel, rather than letting an old belief or behaviour control the situation. Choosing to feel and think in a way that serves us isn’t easy and it’s going to take some time to practice. But she’s worth it, and so are you.

In love and light

PrevPreviousLosing Yourself to Mum-life
NextBreaking Up & Letting Go of LoveNext
I wish there was a script, a written process, a tr

Time is not linear! Despite what we’ve been taug

There are so many books, so many guides to explain

How often are you allowing yourself space to conne

When we have one issue - whether it be a block to

Can't find what you're looking for? Let us help you.